There Is Good In The Hood 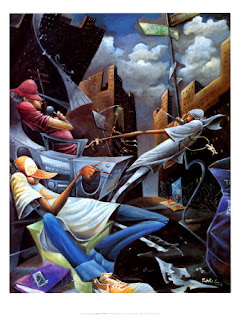 How many of you have been written off according to society, or life's episodes? How many times have you repeated the same thing, different day, yet same results but really wanting to change?
That would be my story as I have honestly thought I would never come out of what I was in for society labeled me; and I began to believe it. However, as time went on and I begin to seek for a life greater then what was said of me or even what I thought was possible I pressed forward.
It isn't always easy to be renewed in the mind when everything around you just seem so chaotic, so discouraging, and hopeless. Yet there was an unconscious expectation to live.
This is a word for the discouraged, the down-trodden, and the broken. Sometimes life throws you a curb-ball. Meaning one that is not expected as we don't ask for our parents, we don't ask to be abused on any level, we don't ask to be addicted to drugs and the list can go on. In that, life happens so what do you do with what looks like a never ending story of disaster? You press forward and you make the best of a the bad situation without drowning; for some would say defense mode. I know I did and it was not comfortable for what was considered a normal life didn't look so normal for one who was coming out of chaos, and destruction. I remember crying out to God asking many questions and one so familiar with those who will read this, why? Why Lord why? Why did my dad have to be my dad, after all he sexual abused me? Why Lord, why did I have children, after all parenting wasn't what a young adult thought it would be, you know the only on Bill Cosby scene? Why Lord why when I finally found a healthy relationship he dies on me, not just dying; But being found dead in my home leaving me with little ones to fend for while losing my mind. The never ending story of hopelessness, and that for me was real.
Is there anyone out there that figured it's just the life in the hood? That growing up in the hood theres nothing to do but hustle and die. Then this message of "There Is Good In The Hood" is for you.
It isn't until we give our life over to Christ and actually let him in that we find "HOPE". That is what I am talking about becoming a new creation in him, a life that really has happiness to it when one really goes all the way into what is being offered. If this is your story then let me say this, life don't stop just because of what people say, or even living in chaos. I didn't even think it possible to change as I was so far gone into darkness I couldn't see the light. It wasn't until I met Jesus. I didn't meet him like the average person who goes to church or has family that raises them in the Body of Christ. Or even a normal jail house awakening. It was in the process of wandering in the hood, yes in the hood that I discovered my freedom and God really existed. I was in my darkest moment and would be highly toxic and asking God if He was real to show me who HE really was. I remember sitting at bus stops smoking and drinking and all of a sudden God showed up. He always showed up in some of the strangest ways, like sending a stranger over to me that needed more help than me. Or that young women pregnant smoking crack with no place to go, and knowing how I'd never want to see my child like that. I'd take this child in and help guide them along the way. Moments when I wanted to give up as it didn't seem like nobody was listening God always showed up and had me come outside of myself with me never seeing he was walking me into the light right in the hood. Is this you, the person who just when your ready to end it, someone shows up or a situation shows up that causes you to look outside of your problems? Then you see if your reading this you made it. The Good In The Hood was you walking into the light to even come to read this. I walking right into my deliverance and never thought I 'd be free nor writing you that " ALL THINGS ARE POSSIBLE WITH HIM, JESUS THE CHRIST". He saved my by putting things in my way that brought about a heart to love just when I gave up. I can go on but this is what I will leave you with, what has been put in front of you to bring you to your now? What has been the reason why you still breathe, and why do you think your still here? I can tell you why, there really is good in the hood and it's in his image and likeness. I pray that your don't stop and that you look within and see over the years where God had been carrying you out.
This is a message from the girl who had no purpose until he showed up!!!
Posted by SuprinaFireWalking at 1:16 AM